I took a break from muscles to give the old mechanical eyeball a much-needed upgrade. The changes made in this round of development mostly affected the case. For more information about how the internals of Atronach's eye work, click the “Project Atronach” tag in the right-hand sidebar to see all previous posts.

The original case was a quick prototype, thrown together with cardboard and ice pop sticks. It was kind of embarrassing, but it did provide a good platform to see how all the moving parts worked and what improvements might be needed. The new version is mostly particle board and linoleum, with some other wooden bits (there are still ice pop sticks in there, actually, you just can't see them now).

The particle board became the front and back faces of the case, which I cut out by hand using a rotary tool with a cylindrical engraving cutter bit. This was rather tedious, and the results were imperfect. I wish, in particular, that the gear teeth were more symmetrical (I also wish I had a CNC machine). At least it's not functioning as a gear. It's structural art. Ssssshhh. I carved the lettering into the front face using a spherical engraving cutter, and I'm very happy with how that turned out.

Speaking of that lettering, it's derived from the legends of golems, which Atronach's name obliquely references[1]. These might be some of the earliest stories about artificial life, and there are additional reasons why I find them meaningful that probably deserve their own blog post. The original golems of Jewish folklore often had something written on their foreheads, such as the word emet (truth) used here. Not to mention that Hebrew script is gorgeous. 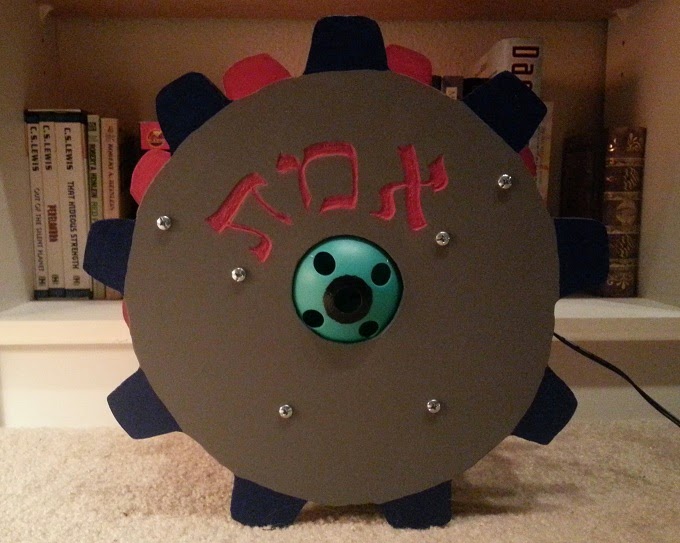 For the outer wall of the case, I wanted something that I could form into a curve, so I bought a single linoleum tile. It came with adhesive on the back, which I dissolved with vegetable oil and washed off. The wall is made from three pieces of linoleum, joined together at the seams with 24-gauge beading wire. Initially, the wall wanted to “peak” at the seams and go flat in between them, instead of assuming a nice round shape. I added a piece of stiff plastic (cut from a large zip tie) at each seam to brace it into roundness. I'm quite happy with how this construction technique worked out, as well. However, one does have to be careful when handling this type of linoleum, because the stiff plastic on the back is rather brittle. Bend it gently and don't try to bend it back once the desired shape is reached, or this rear layer will crack. Always drill holes starting from the back side, and leave plenty of margin between your holes and edges or corners. To support the sidewall, I drove wire nails up through the back face of the case. There is an inner ring and an outer ring of nails, and the sidewall slips snugly between them.

All of the motors, the ball cradle, etc. are mounted to the back plate of the case with screws now, which gives the structure more rigidity and provides for easy disassembly for repairs or modifications (gasp!). I added some wire hoops inside to provide additional guidance for the "tendons" and prevent them from catching on other parts.  The tendons themselves are now nylon monofilament instead of thread, which I found could fray through rather easily.  I also replaced the battery pack with a wall wart of comparable voltage.

Here's a video of the eye during the final post-assembly test:

The next step will be getting the computer into the loop … either by adding the camera and some video processing algorithms, or by establishing computer control over the motor movements.

Until the next cycle,
Jenny

[1] “Atronach” is used in The Elder Scrolls games as a designator for either elemental creatures or certain types of golems. These are the wizard-built golems typical of fantasy contexts, but they owe their literary origins to these old folk stories.

Posted by WriterOfMinds at 9:36 PM