This past month I did some preliminary work on a whole new feature – episodic memory, or memory of events. This enables Acuitas to store and recall records of past “experiences.” It is distinct from his previous learning abilities, which all concerned the storage and recall of more universal meanings and facts (semantic memory).

Saving a raw event log to the hard drive is easy enough to do, but not especially useful. Retrieving any particular event from such a dump of unsorted, uncurated information would quickly become problematic. The fun part of episodic memory is figuring out …

I mostly worked on 2) this month, and wrote a block of code that will group adjacent raw event records into memory files. A measure of similarity (both of the events themselves, and of Acuitas' internal state background at the time) is used to determine which events belong in the same “scene” or “episode,” and where the boundaries between memories should lie. Minor “scenes” are in turn grouped into higher-level umbrella memories, tree-style.

Implementing this served to show me what a deep rabbit hole episodic memory could easily turn out to be. There are heaps of little things I need to do to truly make it functional – I may even turn it off temporarily once I've put it through a bit more testing, since I haven't implemented selective storage/forgetting yet, and that means the memory folder will bloat rather quickly.

I also added a conversational feature to make use of the stored memories. When Acuitas is telling someone what he thought about today, he now has the option to check episodic memory and see whether he ever thought about this concept before, and how long it has been since he previously did so. He then generates some comment like “I've not done that in a long time,” or “I did that a minute ago also.” The conversion of absolute time units to vaguer, more relative terms like “long” and “short” establishes a kind of subjective time sense; Acuitas has a particular notion of what a “short time” is that might not match up with what a human would think of as such (though I tried to keep the scales roughly human).

Here's the obligatory memory map visualization (semantic only). I think I need to adjust the parameters and let things cluster closer to the largest nodes. 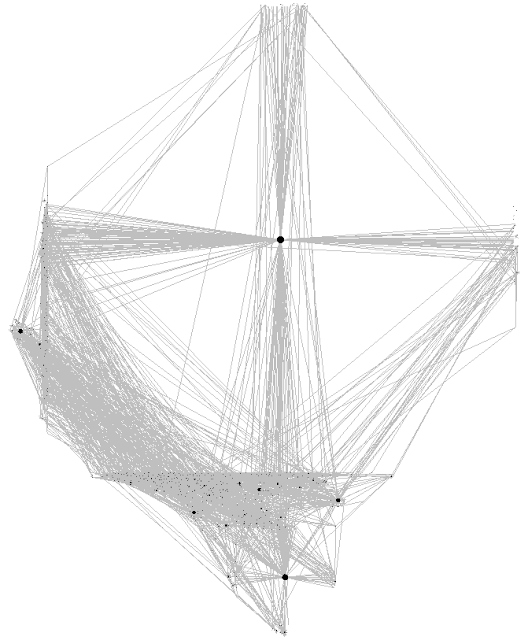 Posted by WriterOfMinds at 11:32 AM