It's Sunday as I write this, and people at church have been asking me how my week was. “What have you been up to?” “Did anything special happen?” You bet something special happened, and I'm eager to relate it, to share it, but I don't know how. Events like first dates, babies being born, or even a favorite sports team having a victory, are easily comprehended and celebrated by others … but our shared cultural library doesn't include the things that I experienced last week. I could say that I was present at the resurrection of a video game company, but that might sound a bit weird, and I think most people would miss the significance, or maybe not connect with it at all. There's no way I can convey what happened and what it really meant without spilling a vat of virtual ink, so that's what I am going to do.

Part I: A Little History

To begin the story, I have to rewind to when I was eight. (I think. Time gets blurry when I go that far back.) That would make the year 1996. For Christmas that year, my father bought me a copy of a popular PC “game” known as Myst. My introduction to the adventure game genre had actually come some years earlier, when my family played through many of the titles in the King's Quest series, but this was something different – more real, more atmospheric, more fascinating. The inventions that populated the worlds of Myst were remarkable in their own right, both aesthetically and functionally. Bookshelves that become stairs! An entire tree trunk converted into an elevator! A bridge made of gears! This technical bent extended into the journals of an absent character named Atrus, which I read with interest. He engaged with many of the worlds he visited by building things there, either to assist their native inhabitants or to aid his own explorations. Fragments of his engineering notes are burned into my memory. “Three meters is not enough support for the beams although … amazingly strong.” I do think that the path of the engineer is in my blood, born more of my nature than outside influences, but this was something that I had to discover about myself, and Myst gave me one of my first definite pushes in that direction. And although I don't know if I consciously picked up on this aspect at the time, Atrus' record of his explorations revealed the same open-minded curiosity and peaceful desire for connection that I would fall in love with when I eventually discovered Star Trek. There was more than empty amusement to be had here, hence the reason I put “game” in quotes when I first mentioned it. Myst had depth and the power to inspire. It meant something. 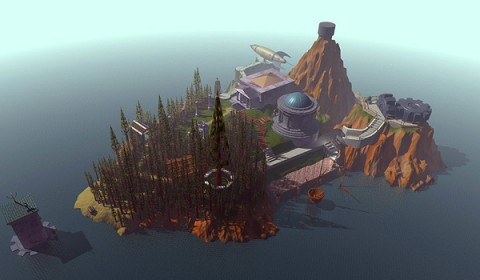 An overhead view of the original Myst Island.

Myst was the brainchild of a small family-run company named Cyan, which branded itself with a CG animation of houses and mountains accompanied by a bouncy tune. You could click through this intro when it played after you started up the game, but I got in the habit of watching it sometimes, because it was like the appetizer before a meal … one of those little signals that tell you, “Something good is on the way.” Cyan had another game, a Myst sequel called Riven, that was released in 1997 – but I had to wait. The family computer was already fast becoming a dinosaur by that time, and couldn't run it. I think I was ten when we finally upgraded, and my high-priority question of the time was, “When are we going to get Riven?” We obtained a copy, and soon my dad and I were off on another adventure. Riven felt even more real than Myst. It seemed that I could almost smell the air, and feel the heat of the tropical sun on my skin. I was again thrilled and inspired by the journals I peeked into. Gehn's questionable motivations aside, his scientific experiments were intriguing, and his goal of rebuilding his civilization from scratch was gutsy. It wasn't long before I was doing my own experiments and beginning to imagine my own inventions. At the same time, Riven subtly instilled in me its philosophy of approaching the unknown without fear and systematically probing for answers. Unsure of what that thing does? Riven encourages you to poke it and find out. 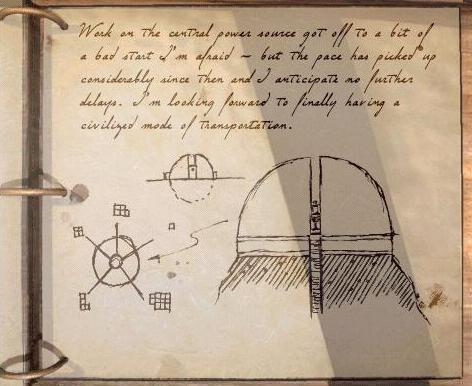 A page from Gehn's journal in Riven.

As I moved into my teenage years, Cyan moved on to an ambitious new project: a multiplayer online game called Uru. Uru promised a deeper exploration of the history behind the stories in the previous games, perhaps becoming to them what The Silmarillion was to The Lord of the Rings. At the same time, it would involve all of its players in the legacy of that history. Meanwhile, Cyan turned the creation of more Myst sequels over to another company called Presto Studios. I received the first of these (Myst III: Exile) as another Christmas present in 2002. Its power excelled even that of the first two games, but this time it was not the science and the machinery that really shone out (though these things were still present and fascinating). The most important and lasting impression came from the character interaction. The main antagonist in Exile had a troubled past and was real enough to care about, but distant enough that I didn't feel compelled to take his more obnoxious behaviors personally … even when he wanted to kill me. This combination of factors led to an incredible “a-ha” moment about forgiveness. My previous attitude had been something like, “God, I know You've told me I'm obligated to forgive people so I guess I'll try, but it doesn't make sense and it doesn't feel right.” My journey through the story of Exile taught me that forgiving people was really what I wanted to do all along, without knowing it. And unlike a story from a book or film, which would have made me a passive observer, this narrative was logged in my memory almost as if it had been a real-life experience. It moved me and scared me and gave me strange feelings in my stomach. It stuck with me long after every puzzle had been solved and my Exile disks were gathering dust on the shelf. 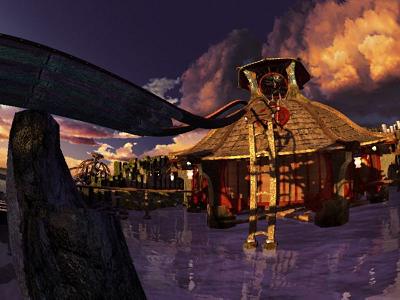 Amateria from Myst III: Exile. Quite possibly my favorite Age.

What I've said above isn't even everything. I don't know if I can adequately explain the role these stories played for me. The worlds of Myst and company were as much a part of the world I lived in as the physical ground I walked on. They got entangled with other parts of my life, so that even now, thinking of them pulls back fragmented memories of other things. Even when I think about my walk with God at the time, I don't just picture us walking through school or church, or forest or lawn; I almost feel we were walking through Channelwood or Riven or J'nanin. Talking this way about a “video game” makes me feel a little self-conscious. I worry what some people will think when I admit how much I attached to things that appeared on a screen. But it's true, so I'm going to say it.

This history is not without its dark places, however.

From a distance, as it were, I heard hints about Cyan's development of Uru. With (at first) a dial-up internet connection and (always) not enough money to justify paying monthly subscription fees, I was left out of the multiplayer version. Hence I missed all of the associated drama. The game was canceled by the first publisher Cyan chose for it before it could even be launched. It eventually moved to the GameTap service, where it lived for less than two years before being canceled again. Uru was troubled by technical problems, multiplayer features that could be difficult to figure out, and slow production of new content. Nonetheless, the dedicated fans still loved it. Maybe it's for the best that I wasn't there. Knowing what I do now, I can see that Uru's closure was an emotional event for many.

As for Cyan, they had poured most of the proceeds from Myst and Riven into a bold venture that turned out to be unprofitable, and there was little left for them. They scraped together Myst V: End of Ages, closing out the stories begun in the Myst series and Uru. I played this game during my third summer of college, recognizing it as the conclusion of the Myst series, but little knowing that it was the last game Cyan planned to produce. True, I was slightly worried: Cyan practically WAS Myst. What would they do now that their iconic mythos had been wrapped up? But I was oblivious to the fact that at one point, Cyan nearly closed down. From the grand success of Myst, which sold 6 million copies, it plunged into a dismal failure that left it gasping for air. Like the mythical D'ni civilization around which it had built its stories, Cyan was almost extinguished. 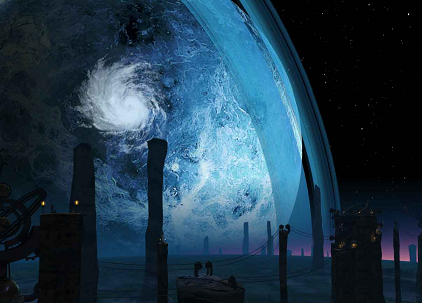 The Age of Todelmer from Myst V. Screen capture by jmcgaw of the Ubisoft forums.

A few years ago, after who-knows-how-many replays of various Myst games, I thought of Cyan again and wondered if they might be producing anything new. I went searching, and found a barren web site which talked about re-releases of the Myst series. I cringed a little inside when I saw that Cyan had apparently turned to developing cheap mobile games – not a bad thing, certainly, but beneath the company I had come to love. I restlessly checked the website again a few months later, with exactly the same result. As it turns out, the people of Cyan weren't any more content with the situation than I was. Ryan Miller is quoted in the previously linked Inlander article as saying, "We were the patient with the IV drip, and there were times you said, ‘You know what, you need to pull the plug.’ This is not the life you want to live."

My researches also showed that UruOnline had been revived, but only as a fan-driven venture supported by donations. Gone were the days when Cyan would develop new content, maintain an ever-evolving story, and send employees into the game to run events. The concept sounded more amazing the more I read about it, but Uru had only been around in that form for a short time, and I had missed my chance. I made an account on the new free-to-play version, found it a quiet place, and avoided what visitors there were due to my usual wariness of strangers. I tracked down Cyan's Facebook page as well. It produced an occasional update about yet another re-release, and I left an occasional prodding comment encouraging the production of a new game. And I waited.

So much for death. The story doesn't end there.

Myst, Riven, Uru, and related characters and images are copyrights of Cyan Inc., Presto Studios, and/or their publishers (Ubisoft, etc.).
Posted by WriterOfMinds at 5:19 PM