About two and a half weeks ago, some exciting news hit the interwebs: researchers from the University of Texas at Dallas had made artificial muscles from nylon monofilament line. All it takes to turn a simple strand of plastic into a device that can push and pull is a particular method of twisting; once formed into shape, the line will contract when heated and expand back to its old shape when cooled. There are numerous articles on the discovery, but my personal favorite is this very complete offering from io9: Scientists Just Created Some of the Most Powerful Muscles in Existence. This video from SciencePlanetMedia is also informative: Artificial Muscle Science. Artificial muscle materials have been around for a while, but these are exceptional in that they sound as though they could be easily made by a hobbyist, using cheap materials. I can't resist. This month's project will be to see if I can duplicate the work of this research team and make some artificial muscles of my own.

I'm ready to claim a tentative success on Phase I of the project: creating a fishing line muscle and getting it to respond to heat. Today I made and tested both a homochiral muscle (contracts when heated) and a heterochiral muscle (expands when heated). Lessons learned in the process are written below for your edification.

The first step in creating one of these muscles is to properly twist the filament. As the filament is spun, only simple twists will be visible at first; but eventually, secondary loops will begin to form. (You can see an up-close demonstration in one of the videos from the io9 article.) You have to twist the filament until it is all done up in these secondary loops, for this structure provides the magic that makes the muscle move linearly, instead of torsionally. Sounds simple enough, right?

Turns out, making these loops is not always as easy as it looks in the video. I found that as soon as the secondary loops began to form, the filament started wanting to kink sideways and twist around itself, forming “whiskers” stretching horizontally away from the filament. Once these whiskers got going, further twisting tended to add to their length rather than putting more loops in the main filament. The end result was a mess like this: 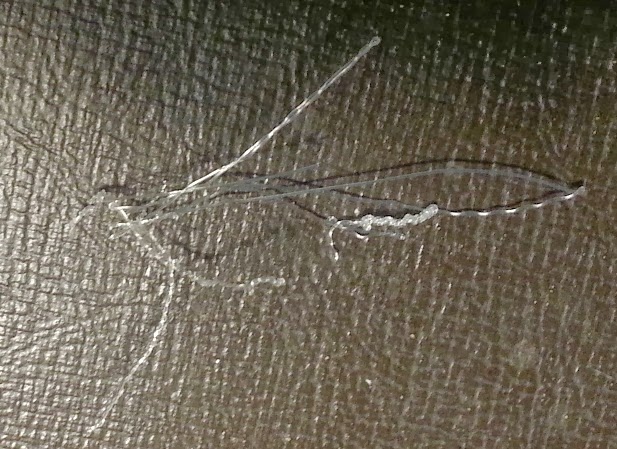 The problem could be my materials. I'm not using fishing line of any of the widths specified in the researchers' work. I'm using some cheap nylon beading cord of unspecified diameter, made by Cousin. It's pretty thin, and has a test strength of only 8 lb. (3.6 kg). I'll have to try the process again with some thicker, better-quality cords. But until I get them, I've found a workaround. It's based on the same technique you would have to use anyway, if you wanted a muscle type that expands when heated.

Start by doubling the filament to make it stronger, putting one paperclip inside the doubled end and tying the two loose ends together around another paperclip. Use non-insulated paperclips, because they'll be going in the oven later. Twist the cord freely until the secondary loops are just about to start forming. You can connect one paperclip to a drill to speed up this part of the process. In addition to fixing the other end so it can't spin, put a weight on it to provide a little tension. Once the first stage of twisting is done, create the second stage by hand-winding the cord around a metal rod (this could be nothing but a paperclip wire, if you want a narrow coil). It is at this point that you must decide whether you want a homochiral or heterochiral muscle. For a homochiral muscle, make the secondary twists in the same direction as the primary twists. If you don't know which direction this is, let a little of the tension on the cord loose, and see which direction the resulting loop goes. For a heterochiral muscle, make the secondary twists in the direction opposite to the primary ones. Keep some tension on the cord as you wrap it around the rod, so that it can't pop sideways to make whiskers or do other stupid things. Slide the coils up against each other as you make them, so they take up a minimum amount of space on the rod.  When finished, use alligator clips to secure the paperclips to the rod, so that your muscle can't unwind itself.

Heat treatment (annealing) comes next. This process causes the nylon filament to permanently assume the new shape you've given it, so that it won't try to untwist again. I annealed my muscles in the toaster oven. Be careful – if you leave them in there too long, they will melt! It only takes a couple of minutes at 200-300 F to set your muscles (maybe longer if your oven is starting from stone cold, or if you're using a thick rod which takes longer to come to temperature). Once they're done, pull the rod out of the oven with a pair of pliers and dunk it in cold water. Your muscle should slip off the rod easily, and should hold its shape, like a little coiled spring.


I recommend testing the muscles with a hair dryer or heat gun, if you have one. My only portable heat source is a soldering iron, so I tested with that. It wasn't ideal, particularly because it could be hard to heat the whole muscle at once, but I was able to see a response. My expanding (heterochiral) muscle, which I made on a 2 mm diameter rod, worked especially well. If I held it horizontally and brought the soldering iron up underneath it, so that hot air rising from the iron flowed over the muscle, it would expand and droop. After I took the iron away, it would tighten up again. The contracting muscle, formed around a large unfolded paperclip for tighter coils, also responded, but not as obviously.

The main thing that really concerns me at the moment, as regards the practicality of these muscles, is that the temperature needed to activate them seems fairly close to the temperature that causes permanent deformation. I accidentally re-set the coils of both muscles by sometimes holding the soldering iron too close. Be especially cautious if you're testing a contracting muscle with a weight on the end – if it starts expanding instead, you've probably heated it up so much that the plastic has gone soft and is deforming under the weight!


Well, that's all for now. Next I'll move on to Phase II – figuring out how to add wires to the muscles and heat them with electric current. I also plan to obtain and test some other forms of nylon monofilament.

Until the next cycle,
Jenny
Posted by WriterOfMinds at 7:30 PM