I've finally done some characterization of these muscles. My primary goal was to investigate the relationship between the diameter of the secondary coils and various muscle properties/behaviors.

I made three rod-coiled test muscles, of different internal diameters determined by the size of the rods on which they were coiled. I attempted to keep other variables constant, including the following:

The passive spring constant test involved suspending various weights from a muscle and measuring the amount of deformation (stretching) produced. The muscles were not powered for this test.

The weight lifting test was intended to measure each muscle's ability to lift weight under power. One muscle was tested at a time. It received its current through a power MOSFET switched by an ATTiny85 microcontroller. A multimeter was included in the circuit to measure current. I had programmed the ATTiny to read an analog voltage, which I could adjust by turning the dial on a potentiometer. The ATTiny sent a PWM signal to the gate of the transistor, varying the duty cycle based on the value of the analog voltage. I hand-adjusted the value of the potentiometer to get the same (effective) current value for each muscle. The distance through which the weight was lifted was measured at steady-state, after the load had risen as far as was possible for that current.

Each data set has been fitted with a cubic curve.  A spring constant can be obtained for each muscle by taking the slope of the linear portion of the curve. 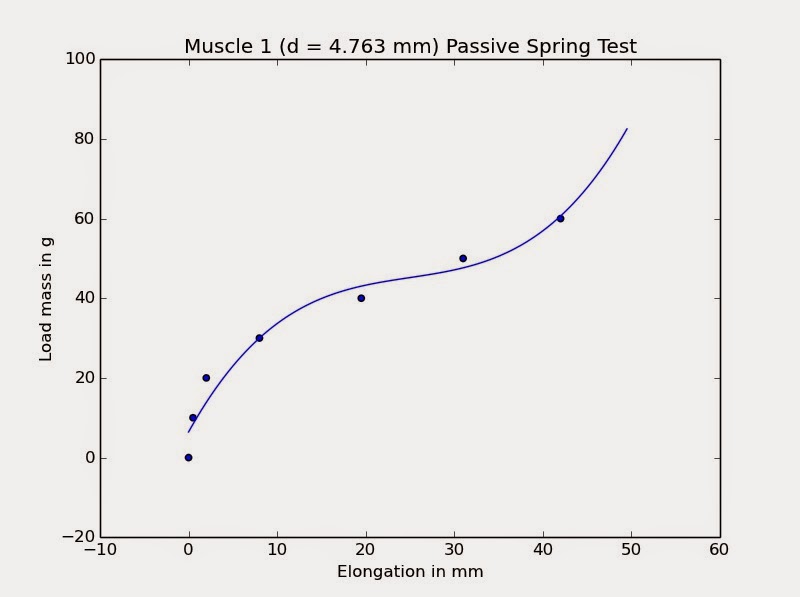 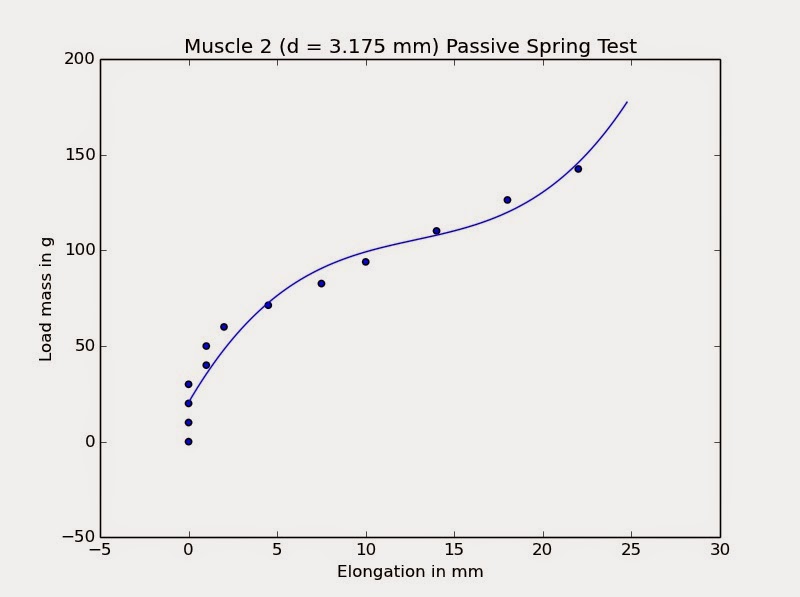 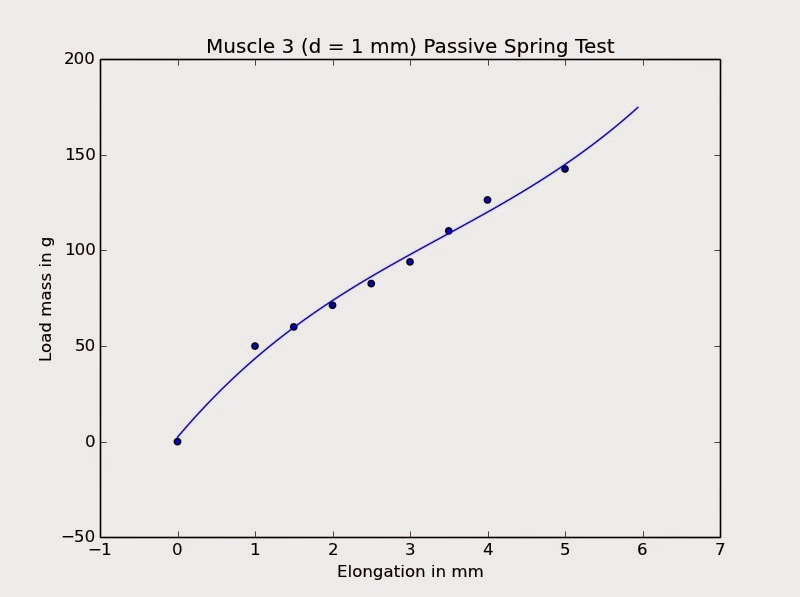 Each data set has been fitted with a parabolic curve.  The (0,0) data point is assumed. 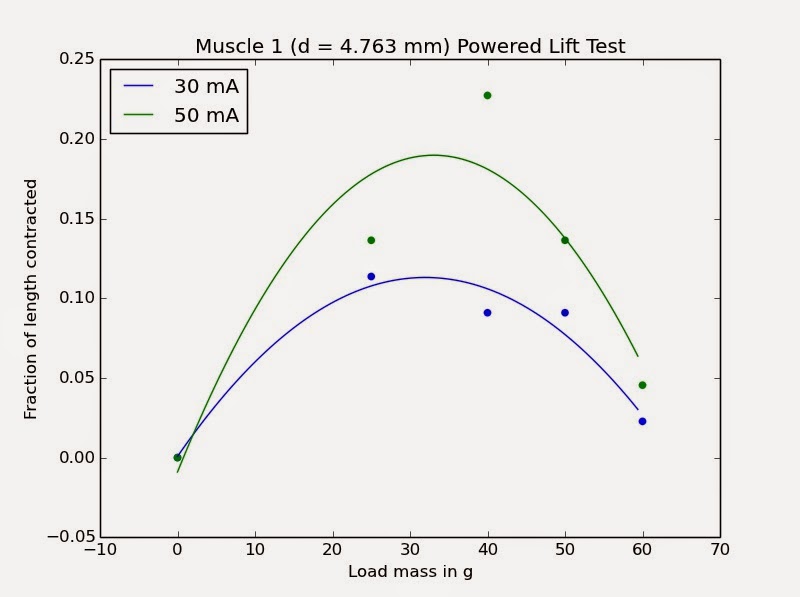 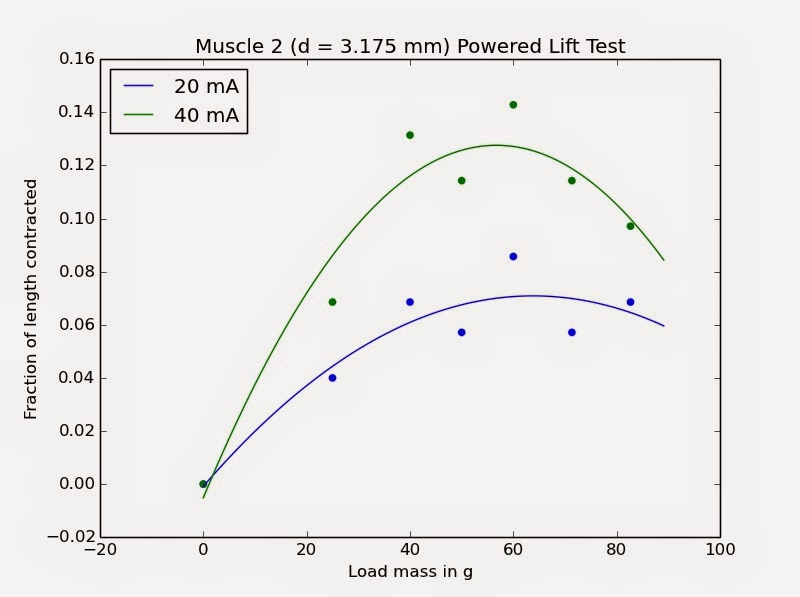 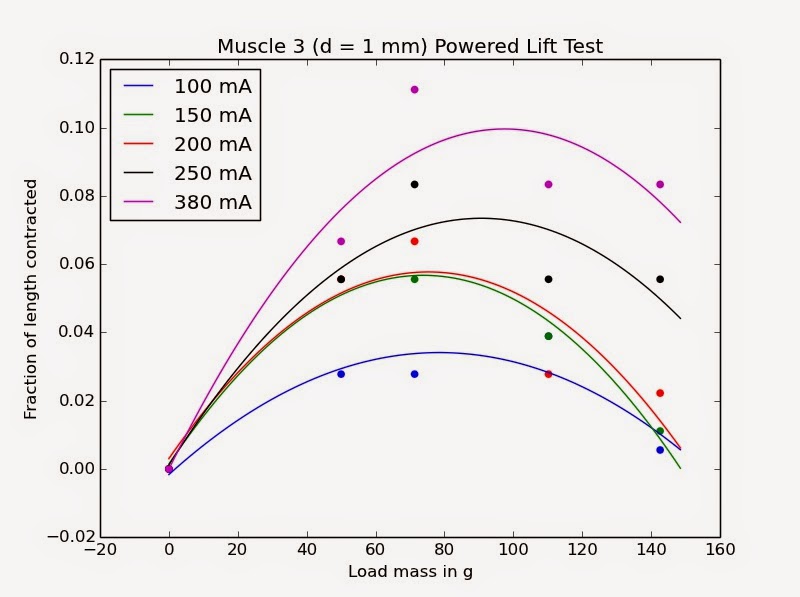 I am going to emphasize again that I'm not working with the greatest equipment here. Distances moved by all of these muscles were on the order of millimeters, and difficult to measure. Muscles can be reshaped by the heat, making the repeatability of the measurements imperfect. Couple that with the possibility of varying ambient temperatures in the house between test sessions, and you have a recipe for a lot of error. Nonetheless, I hope the data is useful in a rough, qualitative way. I'll posit the following:


I now have better answers to a couple of questions that have been asked previously:

Q: Once you've made a muscle contract, can you continue to run current through it and hold it in position?
A: Yes! Just be careful not to overheat the muscle. Current values that are tolerated in brief bursts may be enough to make the muscle flatten or go limp if they are applied for too long.


A: The best diameter depends on your application. As I suspected, muscles with smaller diameters (including the self-coiled ones, which have the smallest diameter possible) can manage heavier weights, but can't lift them as far as large-diameter muscles can lift their optimal lighter weights (though I do wonder how the more tightly coiled muscles would perform if they were annealed with their coils spread out). The new revelation here is that diameter plays in to current requirements as well – large muscles working at their optimum point need less current than small muscles working at theirs.

Until the next cycle,
Jenny
Posted by WriterOfMinds at 9:29 PM