I didn't have any major development goals for Acuitas this month, because I wanted to force myself to do other things, like cleaning the house.  So you just get a bunch of images that came out of me playing with the semantic net visualization algorithm.  I'm fascinated by what disparate final results I can produce by introducing minor changes.  A lot of the variants in this album were made by changing the mathematical function that calculates the size of the exclusion zone (the area where other nodes can't be placed) for each node.

I love staring at these. They're an example of a computer generating something that is practically relevant to its internal state, but looks otherworldly from an ordinary human perspective. 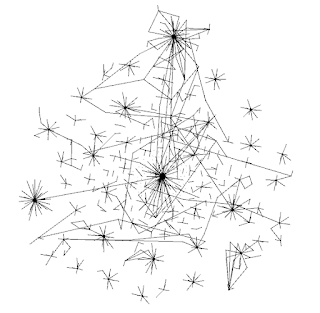 I also wrote some little scripts to help me examine and clean up the less human-readable layers of the memory space, and I expunged some bad information that got in there on account of him misunderstanding me.  Eventually, I intend Acuitas to clean up bad information by himself, by letting repeated subsequent encounters with good information overrule and eventually purge it, but that's not implemented yet.
Posted by WriterOfMinds at 4:20 PM