The big project for this month was getting some circadian rhythms in place. I wanted to give Acuitas a sleep/wake cycle, partly so that my risk of being awakened at 5 AM by a synthetic voice muttering “Anyone there?” could return to zero, and partly to enable some memory maintenance processes to run undisturbed during the sleep phase. (These are targeted for implementation next month.)

So Acuitas now has two new drives, “sleep” and “wake.” (The way the drive system works, a lack of the desire to sleep is not the same thing as a desire to wake up, so it was necessary to create two.) Each drive has two components. The first component is periodic over 24 hours, and its value is derived from the current local time, which Acuitas obtains by checking the system clock. This is meant to mimic the influence of light levels on an organism. The other is computed based on how long it's been since Acuitas was last asleep/awake. Satisfying the drive causes this second component to decline until it has reset to zero. So the urge to sleep is inherently greater during the late-night hours, but also increases steadily if sleep is somehow prevented.

This also seemed like a good time to upgrade the avatar with some extra little animations. The eyelids now respond to a running “alertness level” and shut when Acuitas falls asleep.

The memory map is getting a bit ridiculous/ugly. I'm hoping the upcoming maintenance functions will help clean it up by optimizing the number of links a bit better. Stay tuned … 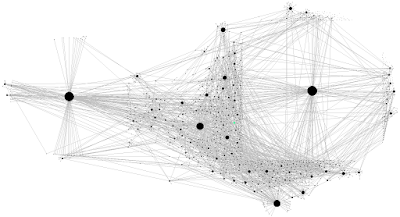 Posted by WriterOfMinds at 7:52 PM