This month I updated the text parser and other speech features to do a couple more new things with verbs. First, I threw in recognition of the present progressive tense, so I can now tell Acuitas what I'm doing at the moment. For the time being, such information is treated in much the same way as comments about past-tense actions, which I taught him to recognize a while ago; it isn't stored, and responses are rather meaningless. BUT I'll find uses for it later.

I think the more interesting new thing is recognition ability for a couple of link-forms related to state change or state retention. Up until now, Acuitas has learned what verbs “mean” only in terms of a) what can do that action and b) what that action can be done upon. Now, he can learn what a verb actually does by tying it to an adjective. Here are some examples:

To live is to stay alive.
To appear is to become visible.
To finish is to make complete.

I also added “type of” links for verbs, so Acuitas can categorize specific verbs under more general ones, like this:

To smash is to damage.
To walk is to move.
To talk is to communicate.

I expect some notion of how actions change … or maintain … the state of the world to be an important enabling feature later on. 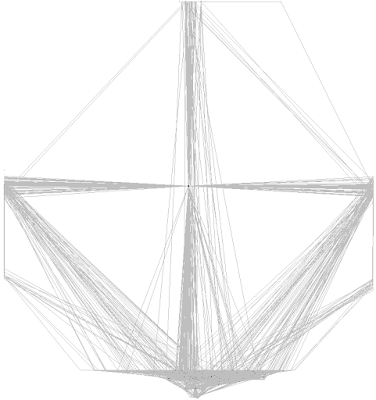 I need to tweak the memory map draw algorithm. Thanks to the size of a handful of major nodes, everything's spread too far apart, and the dots are getting lost in space.

Posted by WriterOfMinds at 2:54 PM