This month I finally got to implement a feature that I've been waiting for a long time, namely, giving Acuitas the ability to “think” when he's not being spoken to. This “thinking,” for now, consists of dwelling on randomly selected concepts from his database. Once a concept has been chosen, he'll pursue it for a while, preferentially letting his focus jump to other concepts that are linked to it – executing a “wiki walk” through the database. Eventually, though, he'll get bored with any given train of thought, and the focus will move elsewhere. I added some animation code to the memory visualization so that the currently selected concept will flash periodically. (The recording below is running much faster than real time. He's actually quite leisurely in his progress.)

There are several things I can envision doing with this behavior eventually, but my immediate purpose for it is the generation of curiosity. Each time Acuitas picks a concept, he'll come up with some sort of question about it – for instance, he could choose a type of link that it doesn't yet have and produce an open-ended question about what might be on the other side. These questions will be stored up and presented to the user the next time a conversation is under way.

Which leads me into the next thing I put a lot of work into this month, namely, the code to start supporting the bottom half of this diagram: speech generation. 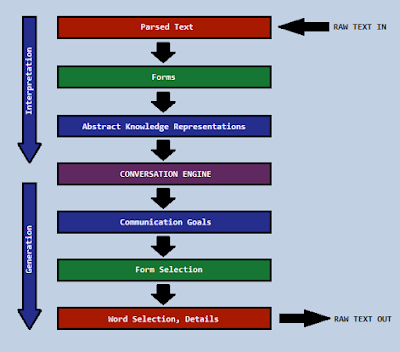 Up until now, Acuitas has said very few things, and they've all been very formulaic … but my goal was always something beyond pre-formed sentences stored in a database. The new module I started on this month accepts inputs in the sort of abstract form that Acuitas stores in his database, then procedurally generates both questions and statements in natural English. Verbs are conjugated and plurals are matched correctly, articles are automatically added to nouns that need them, etc. Some words in the original sentence skeleton might get replaced with a random choice of synonym.


Neither of these major new features is actually hooked into the Conversation Engine yet, so I don't have any conversation examples to show off, but I'm hoping to be ready for that next month.